The weather forecast was for deteriorating weather, and with Norway being a high stakes kind of country we decided to fly directly south from Bergen back to Denmark, specifically Lemvig on the north west coast of Denmark (nordvestra Jyllands).  But it was not to be.  We made a weather break in Stavigner, and after a couple of hours of rain, continued down.  The clouds were low, and we saw several small Norwegian villages being smote, but managed to duck and weave until the sun came out at around the point of the international boundary.
Lemvig is a beautiful little town not far from the fantastic flying club based at Lemvig international – an old airfield put up by the Germans during WWII.  There are around 30 bunkers in the area and the airfield itself was hidden during the war with a couple of local decoy fake airfields placed in nearby towns.  More recently Lemvig is a popular tourist destination as it is so pretty and until 15 years ago it had a large Bang and Olafson factory.  The club itself has hangars and workrooms that were German truck workshops and the clubroom itself was bought from B&O when they shut down and moved on site.
We were lucky that Patrick, a Brisbane boy who has lived in Denmark for many decades, took us under his wing. He showed us all the local sights: the bunkers, the model plane meeting at Lindtorping for jet propelled metre long models – scary stuff, the Strandingsmuseum (shipwreck museum – for those of you who have told us that the South coast of England is the most dangerous in the world, the Danes would put the North West coast of their land in the first place), local barrrows and the remains of a viking fortification, the following day by popular request (i.e. by me) the Thyboron Fiskedage (fish day), where we got to taste local specialties, hear Torfisk play (lit. salt fish, but actually the local band that is Danemarks aeldeste Boyband), and buy a massive Kulmuehle – coalmouth or hake, mmmm it was nice baked.
We had to stay an extra day in order to see the Traktor Trek, where custom built tractors compete to pull a moving weight behind them. 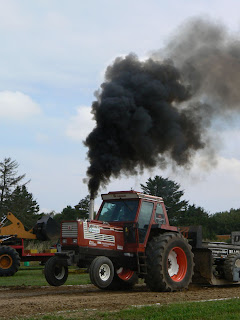