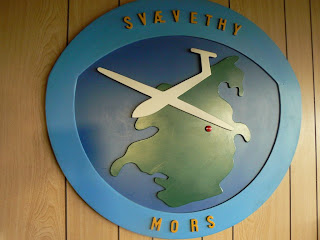 In Denmark we have been really overwhelmed with kindness.  Not long  after we touched down in Morsoe Jens-Erich & Ewa arrived with some really superlative Danishes, apparently inspired by our account of the Danishes eaten at Endelave. We haven't heard from them yet, but we hope that they still look at our blogs from time to time and will see his and drop us an email.

Morsoe is a medium sized island in the north of Denmark, its connected to the mainland by a bridge but due to the island nature of the region it feels pretty isolated, or as people say about this area of northern Denmark, it's the 'wild West'.  In the past the farmland on this island wasn't very valuable, which allowed the gliding club in the 70s to purchase a swathe of farm land and move away from the nearest large airport to their own small strip.  For the first few years members who were themselves farmers took care of the harvest, but now they lease the land out, proceeds of which help fund their aircraft, what a brilliant way of organising a club to make it unaffected by governmental policy and financially independent.

The next day we cycled into Nykobing, the major town on the island, which being a pretty little port town should be quite similar to Lemvig, which by plane is pretty close by and completely overrun by German tourists.  But it seemed a lot quieter and a bit economically depressed.  Everywhere we go (e.g. McDonalds in Aarhus, don't ask) we see brochures for its major tourist attraction, Jesperhus, a big garden funpark, so it seems like it should be a major tourist destination.

We didn't make it there though, instead we did some hard work uphill on gravel mountain-biking on our extremely road specific bicycles through a fabulous forest and had a look at the great cast concrete bridges connecting the island to other landmasses.