After the hassle and expense of Talinn airport we decided not to be suckers and to land at Cesis and take public transport to Riga. All our net research indicated that the bus is by far the better option, but with the bikes it had to be the train.

Flying over Latvia we were a bit confused by all the pinkish roads, a new type of road surfacing???  No, no surface.

That morning I'd called a hotel to check the pricing and we cycled directly there. Only problem, the price she quoted 'thirty-two lat', did not equal the price she wanted 42 lat. We circled around this point for a while, with her sometimes agreeing 'yes thirty-two lat' and sometimes disagreeing, 'no, thirty-two lat!' whilst pointing at the number she had written '42'.  Despite our best efforts I don't think we managed to disabuse her of the notion that 42 is pronounced thirty-two and we eventually left.  (These two sums represent €45 and €60).

We couldn't really understand why the hotels in town were full, but luckily one lady on reception kindly called around for us (we hadn't found the correct mobile provider at that point and couldn't call ourselves).  Oddly enough the hotel we'd just been at was not on her list of places to call.....  So we ended up a bit out of town, but it was cheap and a shelter from the rain.  The next day we had a look at the quaint old town and discovered hundreds of mountain bikers.  Turns out there was a race.... 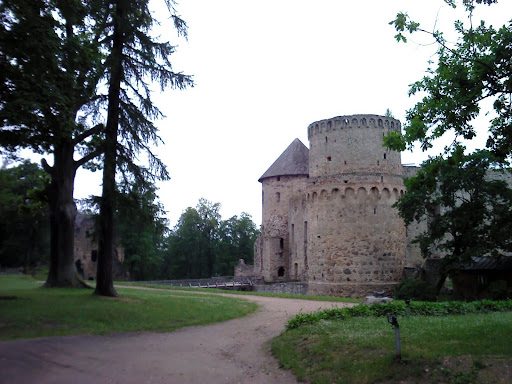 Regarding Cesis airfield (link to their website), we didn't actually see anyone there, except for the watchman with his kinda scary night stick thingy.  No one wanted any payment, the watchman was in fact horrified when I wanted to give him my change as I was leaving Latvia.  So despite being on the side of a main road it seems a secure position.

It is about 4-5km to the main station, which would be an easy enough walk, the most direct way ended up via a large amount of roadworks and stone roads which was less ideal with the bikes.
Posted by Helen Coker at 10:07 am