This was our second destination with Clare and Guntram.  You wouldn't belive it but even a small distance like the 45nm from Egeskov on Funen island to Samso island actually takes a while if you need to ferry people and gear – 3h flying in total for Julian! Samso airfield is small & quiet, a great location for a break, especially considering that it's on the sea. When the weather was good we saw visitors from Germany, Copenhagen and many other parts of Denmark.

Samso is world renowned and most impressive as it's completely self sufficient energy wise – they put up 11 wind turbines, which are part owned (subscription) by the local people and over the year provide more energy than is used on the island. Many people come to study Samsoe from overseas, though I am not sure how well it would manage to be self sufficient if the population were larger.

Over several days we managed to cycle all around Samsoe, which is also Copenhagen's veg box, and there were great vegetable stalls everywhere, which caused Guntram great consternation in deciding which vegetables were needed..... 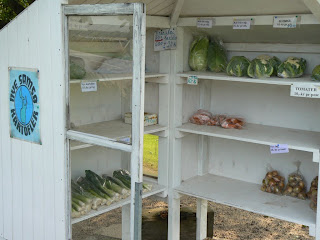 There were also heaps of Loppen (garage sales or in Swedish Loppis), really strange as they always seem to be selling junk that a) no one would want to buy, b) no one would have ever wanted to buy, so where does the stuff come from????? Having completely ignored the Loppis in Sweden we decided that we should take in this cultural phenomenon and inspected all stalls we passed.
Samso is really great to cycle around, as it's fairly flat and there really isn't much traffic.  Well except for this caravan, which we passed in total 4 times as we stopped to look at stuff. 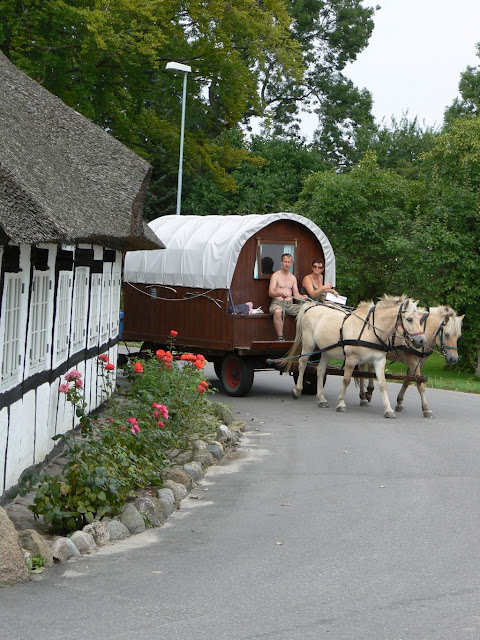 Apparently weekly rental of horses and caravans is a new business venture for Samso (though I see that they do similar on the German East Fresian Isles), which does seem a lovely relaxing way to holiday.  We prefered the North peninsula to the South, simply because of spectacular Langor harbour and beautiful Nordby village.
There were a lot of very talented potters and other artists on the island, but since it was no longer peak holiday season, everyone seemed to have different opening hours and we didn't manage to have a look in any open shop (other than the supermarkets).

After a few days on Samso Rune, who runs Samso International Airport suggested that we give a 1.5h lecture to his Flight students.  That evening.  So it ended up being a pretty hectic day with Julian sorting through our photos to get some nice shots for one 45 min lecture 'the build', and a second 45 min lecture 'the trip'.  Denmark has a unique schooling system with approximately 10% of students going to boarding school, and some boarding schools like this one on Samso offer 'adventure' subjects to attract the students.  A few of the other subjects on offer were parachuting, bunji jumping, scuba diving and horse riding.  So the students were around 15-17 years old but seemed to concentrate surprisingly well.  If you would like us or Julian to give a talk, please let us know, we're relatively well prepared now!
Clare had to get back to work in Berlin, but we weren't very lucky with the weather - we had planned to take her and Guntram back to Flensburg by plane, but there was lots of low cloud and rain, so we sent them off by ferry.

And of course the weather cleared up the day after they left.  So we went kayaking across to Langor, as Rune has not just bicycles available for hire on Samso's airfield, but also 3 kayaks (one double).

It was a pity about the wind on the day we chose, which made it pretty hard work, but still fun!
So in summary Samso was a really lovely place and a great destination for flying in Denmark. Rune was most helpful and all the necessary facilities were available (including 2 toilets and a shower).
Posted by Helen Coker at 10:07 am