Copenhagen from the air

Coming from flying in the UK where airspace is very strongly controlled, Europe has been a real eye-opener.  Regnar suggested that a flight over Copenhagen would be a good idea, and that if Copenhagen's main airport, Kastrup, weren't too busy, they'd let us fly over their runway.  Crazy, we thought, but gave it a go.  And it worked.  Cleared to fly over runway 12 (120 deg), not under 300ft (100m).  Then once we reached the end of the runway we didn't really know where to go next, so asked for permission to do a 180 and fly back down it.  Granted.
We also got to do some good sightseeing over Copenhagen.  As a German speaker I was fascinated to discover from wikipedia that the name was originally Køpmannæhafn, which is understandable from modern German as kaufmann (merchant) hafen (harbour).
Kastellet is one of the best preserved fortifications in Northern Europe.  Construction started in 1626 and originally the king intended to have a castle there.  From the air you can see its pentagram form much better than on the ground. 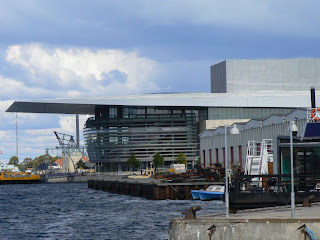 We find it really interesting to look at things from the air and from the ground and compare the resulting photographs.  Below is the Copenhagen Opera House, donated by Maersk shipping to the Danish state and located just opposite the Royal residences.

Email ThisBlogThis!Share to TwitterShare to FacebookShare to Pinterest
Labels: Copenhagen